Start a Wiki
Agency Troopers are encountered only once, in the beginning of the final Chapter. They wear advanced versions of the Haz-Mat suits that Lasrian Troopers wear, with reflective visors and black coloring. They throw Frag Grenades, and are equipped with Korbov TK6 assault rifles, outfitted with Governors. They are almost just as easy to kill as their Lasrian counterparts, but due to limited cover and sheer numbers at close range, the novice player may die several times. The fight with them can be skipped entirely if the player runs into the tunnel and away from the soldiers. 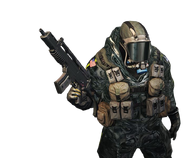 Add a photo to this gallery
Retrieved from "https://darksector.fandom.com/wiki/Agency_Troopers?oldid=4320"
Community content is available under CC-BY-SA unless otherwise noted.