Once you gain control of Hayden, walk into the radio building. Watch the cutscene and now you've acquired the Glaive! Time for some fun.

Walk forward through the door and take cover behind some barrels. Lasrian troopers will come to attack you. Pop out of cover when you have a good shot and throw the glaive; you don't have any ammo for your pistol. Again, try to aim for the head to kill enemies faster.

After killing them all, take a left into the restaurant and pick up the rubles on the table to the left. Picking up an enemy AKS-74 won't work, because now they have Governors attached which, when in proximity with an infected person (that is, you), will destroy the weapon after a few seconds. Go to the right of the bar and break open a box of ammo, then head upstairs. Break open the ammo box in front of you and take the rubles on the box behind you. If you want, head out on the balcony and get some more ammo.

After cleaning the place out, open the door near the stairs and take cover in the corner. Take out the five Lasrian troops and you'll gain the Steal ability. Use it to grab a briquette of C4 on the scaffolding to the left by aiming at it until the orange flow appears and throwing the glaive. Plant C4 on the door on your right and run away to escape the blast radius.

Once it blows up, continue. Grab the Fire Rate upgrade that's on the table near the far wall using your newfound Steal ability, then continue through the door on the right and walk onto the planks and fall through the floor.

There will be a soldier creeping around outside the room. Wait until he busts open the door, then kill him, turn left, and kill another soldier. Go down the hallway and into the room on the left for more ammo and rubles, then continue down the hallway. Take the rubles on the table, then go through the hole in the wall. Take the ammo on the desk, then go through the doorway on the right and down the stairs.

After the Colossus takes enough damage from either you or the soldiers, it will run away, leaving you and the soldiers. Mop up the rest of the enemies, then proceed to the raised bridge on the right. Throw your glaive at the red control panel to lower the bridge. Cross it, grab more ammo, and open the doors on the right. Break the lock on the grate and jump down to complete Chapter 2. 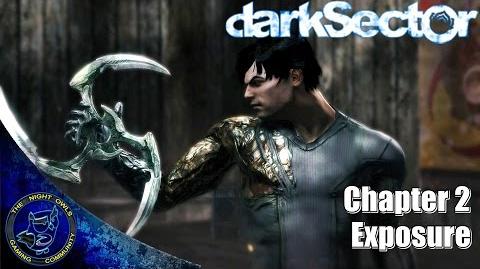