As you start the chapter, there are some rubles and a box of ammo on the shelf to the right. Go down the hallway and go outside. Run down the coast until you reach the camp, but don't miss the briefcase of rubles on the left next to a plank.

Once you reach the camp, there will be a box of ammo in front of you that you can take. Take cover behind a tent wall or crate and take out the Lasrian troopers that are coming. Watch out for grenades; if it is close, run away to avoid the blast. Once you've taken out all the troopers you can see, move up and take cover behind the line of crates next to the tent on the right and keep slaughtering troops. There's some more ammo in a tent on the left if you need it. 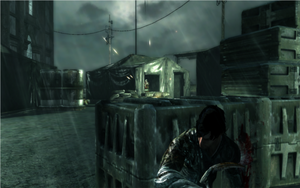 After killing them all, you'll learn Power-Throw, which lets you do quadruple damage if you time your glaive throw correctly. You have to use it to break off the lock on the gate ahead. Inside the tent ahead you will find an accuracy upgrade and a metal weapon crate, which you can break open with (surprise!) Power-Throw. 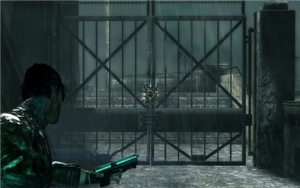 After taking those, go down the stairs and break open another gate. Go forward and take cover behind the crates on the left. Take out more troopers and keep moving forward, hopping from cover to cover. Picking up enemy weapons may be useful here because of the short range of your glaive, and they can also help in taking out the machine gun emplacement on the left.

After the fight, grab some ammo in a tent on the right and near the grate on the left, then break the lock on the grate and jump down.

Walk down the hall and take a left. Continue until you reach the room with a metal door. There are some rubles next to a dead soldier on your left. Go down the small hallway, take the ammo, and throw your glaive into the circuit breaker to charge it with electricity. Go back to the metal door and throw your glaive at it to electrify it and make it open.

Continue down the catwalk and now you have your first taste of the infected! Power-Throw and try to take out as many of them as you can. Once you've alerted them, more and more infected will keep swarming you, so just keep glaiving and meleeing until your path is clear momentarily. Take the rubles on the table to the right, then go down the steps and into the alcove with another circuit breaker. Take the ammo if you want, then charge your glaive and run down either of the side hallways next to the alcove and open the metal door. Climb down and be prepared for a fight.

Just keep dodging around and Power-Throwing. Eventually the double doors on the far side of the room will open and more infected will swarm out. Kill them and proceed through the doors.

Run forward until you reach the room with the elevator. Grab the ammo and the double shot upgrade between the filing cabinets on the right, then break the lock off the elevator. Ride the elevator up.

Walk forward a bit and you'll get the Aftertouch ability! This lets you control the Glaive by holding the glaive button and moving the right stick/mouse. There's some ammo on the left that you can grab as well.

Go out of the building and to the right and take cover behind the stone railing. Use Aftertouch to decapitate as many soldiers as you can. Watch out for the two Maulers; they can sneak up behind and instakill you and their shield makes them hard to take down with the glaive. After you take them out, move up and mop up the rest of the soldiers.

Once you kill them all, check inside the two sheds with downward sloping roofs to find more rubles, a clip extender upgrade hidden behind some pipes and cardboard boxes, and some more ammo, then head to the locked fence gate on the right with more ammo next to it. Use Aftertouch to hit the red button on the other side of the fence, which will open the gate and let you enter the door.

After the cutscene, break open the ammo box, then break off the lock on the grate and climb down. Walk forward and open the door on the left to complete Chapter 3. 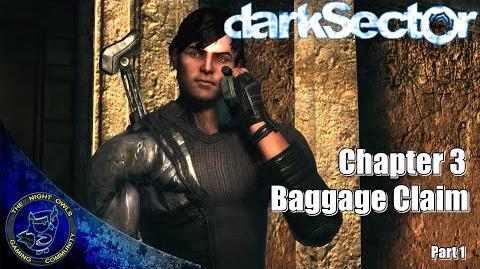 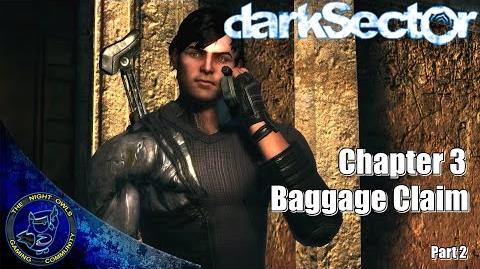