Start a Wiki
Dark Sector Walkthrough
« Chapter 4: Moths to the FlameChapter 5: The ShipmentChapter 6: The Bait »

Chapter 5: The Shipment is the fifth chapter in the game Dark Sector.

Walk up to the metal crate and pick up the Clip Extender upgrade case before you step into the Black Market manhole. Harness electricity from the generator into your Glaive and throw it at the electronically-locked door and proceed into the next section for a brief cut-scene.

It's another Jackal Tank! Run outside into the courtyard and take cover behind the crates. Power Throw the nearby truck to blow it up, harness flame into your Glaive and throw it at the black slime-covered area pictured below to reveal an electric conduit.

Charge your Glaive with electricity by throwing it into this conduit and then throw the Glaive at the Jackal Tank. This will stun it for a few seconds, giving you enough time to get behind it to kill the driver and enter the Jackal.

Warning: Don't step out of the Jackal at any time during this next section. If you do, the game will automatically save and you won't be able to re-enter the Jackal, forcing you to go through this area on foot.

Now that you're in command of the Jackal, a large door in the courtyard will open up, revealing a platoon of troopers. Slice through these enemies by using the Jackal's firepower. Only the rocket troopers can really hurt you in this area, so use your counter-measures to avoid the rockets and concentrate your fire on them instead of the standard troopers carrying rifles.

Once you reach a dead end to the alley (signaling the end of Jackal Tank area), ascend the metal staircase and enter the warehouse. Pick up the 3,000 rubles that are on the shelf in front of you once you enter the warehouse, and then walk through the double doors into the next section.

Run forward along the train tracks until you arrive at a courtyard full of troopers. Lucky for you, you have gained a new ability into your Glaive: Energy Pulse. Harness fire into your Glaive from the vehicle on fire in the middle of the courtyard and throw it at the crowd of troopers, and then use Energy Pulse to create a power explosion which will kill anyone near the Glaive when you use this ability.

After the troopers have been killed, enter the warehouse and pick up 3,000 rubles on the shelf. Proceed through the double doors deeper into the warehouse. Take cover behind the crates and engage in another fire fight with troopers. Proceed up the metal staircase to the second floor and kill any remaining troopers.

Walk along the catwalk into the next area of the warehouse, fight more troopers and then use the Black Market once the area is clear of enemies. Run outside for a brief cut-scene.

Now you're on a shipping vessel. Run forward into the corridors, and take cover by the railing looking out over the storage containers. Use this height to your advantage and kill the troopers on the deck below. Once they've been killed, drop down to the deck below and fight the helicopter.

Pick up the rocket launcher next to the weapon crates (pictured below). Use the storage containers for cover from the helicopter's firepower. Use the same strategy that you used against the Jackal Tank and the previous helicopter you encountered: step out from cover once the helicopter isn't firing on you and shoot it three times with rockets.

Walk forward through the corridors of the ship - picking up the Fire Power upgrade case along the way that is sitting on top of the chest in the room with the metal cages - until the cut-scene kicks in.

Now the boat is starting to flood and you have 10 minutes to get out of there. Start by climbing the nearby ladder (pictured), down the hall and into the flooding room to encounter some infected.

The infected on the boat are there to hinder your progress through this area and  nothing more. If you can run by them, do it - don't waste your time fighting them, because the countdown clock won't care. What you do want to spend your time on are the door puzzles you need to solve in order to get out of this boat before you drown.

Each door on your escape route is electronically sealed. You will need to harness electricity into your Glaive, throw it at these doors for the locks to break, and then you can continue into the next room to repeat the same task again and again until the level is complete. You can obtain electricity from any of the generators (pictured) you come across.

The hardest generator you'll come across will require you to aftertouch your Glaive in order to get to it. Throw your Glaive towards the fence and quickly go into aftertouch mode. Now, guide the Glaive through the narrow slot and into the electrical conduit to harness electricity and then throw it at the nearby electric sealed door.

You'll have to aftertouch into an electric conduit one more time, except you'll have to guide the Glaive high, then low, and then high again up into the conduit. Then you have to quickly throw it across the water and into the sealed door

Now that you have broken the electric lock on this door, ignore all of the infected who are trying to attack you and run through the open door. After you pass the door, don't go strait to the end, look for the stairs on the right and head up them, there you will find an Upgrade Slots case. After grabbing this upgrade, make your way back down the stairs and head off the ship.  During this time, the timer will continue going till you exit the ship. 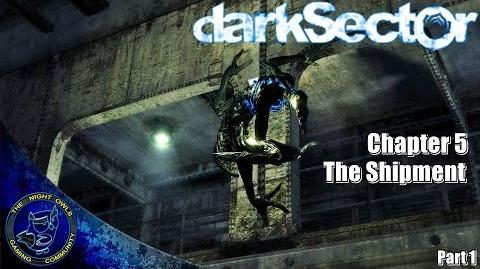 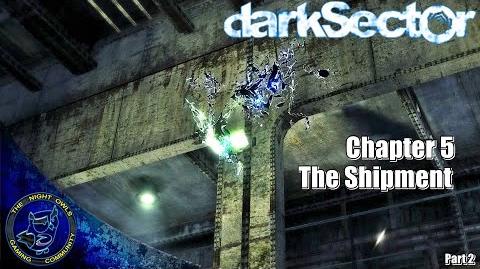