Chapter 6: The Bait is the sixth chapter in the game Dark Sector.

Walk towards the manhole cover and enter the Black Market to purchase any new weapons (you'll at least want a shotgun on this level. I recomend the Protecta). Once you exit from the Black Market, continue forward and fight a new enemy type: Stingers.

Stingers are very agile, making them much harder to kill than the infected, and they're able to shoot a stream of energy at you, though you can block it with your shield. It's easier to kill them once they get up close if you have a shotgun equipped, or with your Glaive's power throw.

You can pick up the Accuracy upgrade case inside the green army tent nearby, and you could utilize the nearby turret to help kill stalkers. Once you've defeated all of them, the doors to the nearby building will open. Ascend the stairs and go through the double doors.

When you enter the building, walk to the right and on a table to the left of the slime door is an Enferon Shells upgrade case. Head to your left there will be a huge hole in the floor. Break the water main with your Glaive so that it causes the electric generator next to it to start emanating electric sparks.

Throw your Glaive at the generator this time to have it catch fire. Harness the fire into your Glaive and throw it at the black slime-covered doorway to continue forward through this area. Fight more stalkers and proceed into the art gallery hallway. Open the door at the end of the hall to enter the main exhibit hall.

Fight more stalkers and pick up the 1,000 rubles on the bench in front of you. Continue outside into the courtyard, fight more stingers and press forward into the next building. Once you enter the main lobby to this building, go up the stairs, pick up the Stopping Power upgrade case and then encounter the miniboss.

The armored trooper has a gatling gun with a grenade launcher attachment as his primary weapon, and he's armored from head to toe, which makes any direct attack approach pointless.

The only way to get to him is by destroying the two circular generators on his shoulders. You have to position yourself in order for you to destroy these shoulder generators (with either your Glaive or a gun).

Once those shoulder generators have been destroyed, attack him until he flashes red. When this happens, quickly run up to him and execute the finishing move to kill him. His corpse will be an electrical conduit, which you can then use to harness electricity into your Glaive. Throw it at the shorted-out elevator control switch that powers up the elevator, then step into the elevator to end the chapter. 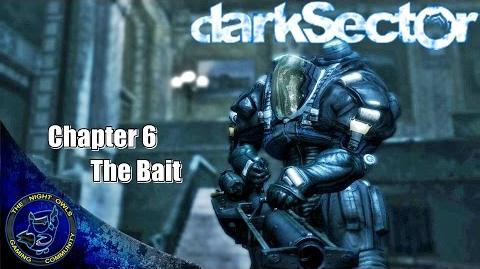