Chapter 9: Threshold Guardian is the ninth and penultimate chapter in the game Dark Sector.

The ninth chapter is another lengthy one, but it's also the last where the black market guy can be reached.

There is a manhole just after the starting point. There are no new weapons available for sale, but now is a very good time to apply upgrades. The VX Carbine might also help in the upcoming firefight, and Hayden can always run back here to switch weapons before continuing to the next areas.

Take the rubles case on the crate, the rubles on the ground near that crate, and the rubles near the corpse, just around the corner past the manhole.

Use a Power Throw to break the reinforced lock on the gate in the fence, and kill lots of soldiers at the street-like area. After the first waves of soldiers (including the ones on top of the vaulted wall) die, another soldier will bust through the barrier blocking the path within the vaulted wall.

In the second exterior area, on the other side of the vaulted wall, face even more soldiers. For the two or so shield soldiers, use the shift ability to sneak behind them more easily.

Inside the building, a powersuit soldier will appear in the room at the end of the entrance corridor. Kill him. Use the electricity from the powersuit soldier's corpse to activate the sparking switch that opens the shutter leading outside to a cliff area.

With his super suit, Hayden can now carry the chaingun used by the powersuit soldier. The chaingun reduces mobility, but it comes with infinite chaingun ammo and ten linear explosive shells (press the Reload Button to view the remaining number of shells).

Just past the shutter, there is another chaingun lying on a crate. Kill the several soldiers who appear at various spots in the distance. When enough bad guys are dead, some more soldiers will blow open a section of the fence along the side path. Follow this side path, which winds around the cliffs with the buildings.

The next section is a wide exterior area with opened containers and lots of zombies.

Take the Fire Power upgrade on the small wooden boat lying on some rocks, on the waters below the opened container that has a light and a dead soldier. Use the glaive to grab it. Take the rubles case and the rubles on the floor of the bridge, past the gun emplacement.

There is a manhole on the bridge, past the gun emplacement. This is the last manhole, so take care in choosing weapons and any upgrades. Use a Power Throw to break the reinforced lock on the gate that leads onward.

When Hayden tries to cross the next bridge, he will get blown down to the lower level and become caught in an enemy ambush. Stay behind the walls for cover, and watch out for the two powersuit soldiers. One way to kill them is to let them cross the bridge and approach. When they are close enough, use the shield ability, equip a shotgun (preferably an upgraded Protecta) or some other powerful weapon, and quickly mow them down. After the powersuit soldiers are dead, use their chainguns and explosive shells to fight off the other soldiers more easily.

When the first set of bad guys is gone, follow the walkways around to the other side of the entire area, and kill a second set of enemies. Use the fire from the blazing crates to burn the black barrier blocking a ladder on the walls. Climb up to the upper walkways, and fight a third set of soldiers. Use the shift ability to sneak behind the shield soldier and to move closer to the gun emplacement more easily.

Past the gun emplacement is the other side of the bridge where Hayden has tried to reach earlier. Continue through a courtyard where several Jackals are quietly parked, and go through the open doorways that lead into an industrial room.

The Nemesis attacks by following and slashing at Hayden, and occasionally it will throw its own glaive at Hayden. This is a very puzzle-like battle compared to the encounters against the other bosses, and Hayden doesn't really need to waste any ammo against this boss.

For the first phase, roll to the side to avoid the boss and its nasty chopping attacks, but try to stay more or less around the middle of the room. Eventually, the boss will charge up its own glaive with electricity. Prepare to roll to the side as soon as it makes a spinning motion and throws its glaive. Then, use the electricity from its glaive to hit the boss, and it will be stunned (glowing red). The boss must be hit in this fashion, while its own glaive is still separated. Sprint up to the boss, and perform a "finisher" against it, pressing the displayed button.

For the second phase, the boss will leap up to a high ledge on one side of the room, and it'll charge up and throw its glaive again (this time without making a spinning motion). Again, roll out of the way, and use the electricity from its glaive to hit the boss, while it's still standing on the ledge.

The phases will now repeat, so use the same tactics again. Hit the boss with its own electricity and perform finishers against it about five or so times to kill it.

At the valley, take control of the Jackal. Like before, use its countermeasures to throw off enemy rockets. Fire the explosive shells to blow up the gates in the way, and watch out for soldiers on the watchtowers, the cliff ledges, and the bridges. At the end, drop down the ledge to the inner valley. 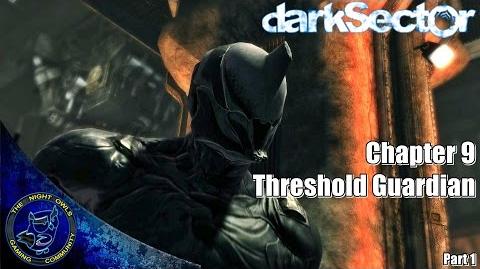 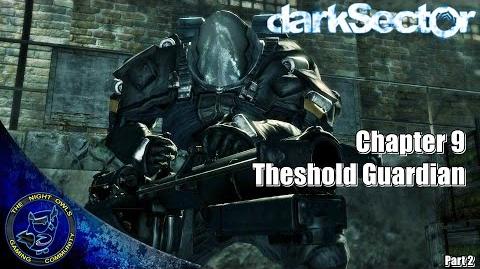 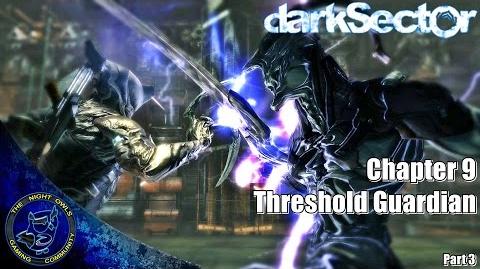 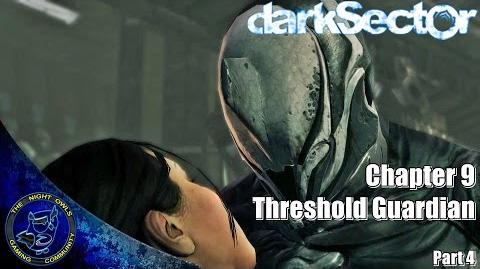