Start a Wiki
The Colossus is a highly evolved/mutated infected individual that Hayden faces on his journey through Lasria. It is extremely strong and has surprising agility for its size. It's appearance is gorilla-like, and it generally moves around on all fours,bounding around with a thunderous clamor. The Colossus is covered in a thick, metallic armor-like skin that renders it highly resistant to firearms, however, the armor can be neutralized by fire, similar to that of a Stinger, it can also regenerate it's skin, like a Stinger. The Colossus also has an avian head, similar to a Stinger.

It first appears in Chapter 2, after Hayden enters a large warehouse. It partially destroys the warehouse and assaults Hayden, but eventually flees after taking enough damage from Hayden and Lasrian troopers.

It appears thrice in Chapter 4. Its first appearance is shortly after Hayden is hit with the first ultra-low frequency pulse. It jumps down from above and smashes the ground, killing all the soldiers shooting at Hayden. It then jumps away and flees.

Its second appearance is after Hayden exits the cemetery. Once again, it jumps down and smashes a Jackal to bits, before jumping away again.

Its final appearance is in a church, where it attacks Hayden head on. It initially hangs from pillars and throws immense rubble at Hayden, which will seriously injure him. After Hayden knocks it off repeatedly and shoots it in the head, it stays on the ground and continuously charges at Hayden and throws more rubble at him. Eventually, after sustaining a great deal of damage, it dies, giving Hayden the Shield power.

In the final battle in Chapter 4, it initially hangs from pillars and throws rocks at Hayden. Dodge the rocks, as they will nearly kill you. To knock it off the pillars, light your Glaive with fire and throw it at the Colossus. Once it falls off, run up to it and perform a finisher. Do this three times in a row and he will stay on the ground. After this, just continue spamming fire or electric glaives at the Colossus until it dies, and continue to dodge its charges and throws. It is also optional to neutralize its armor with a fire-lit glaive and damage it with your firearms and your glaive. 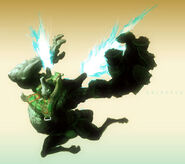 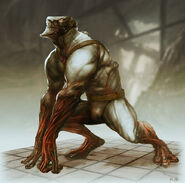 Add a photo to this gallery
Retrieved from "https://darksector.fandom.com/wiki/Colossus?oldid=4622"
Community content is available under CC-BY-SA unless otherwise noted.