Start a Wiki
These soldiers wear a highly advanced and armoured suit which is capable of sustaining a large amount of damage. They are armed with a chaingun/rocket launcher combo which can be extremely deadly, even on normal difficulty.

These elite soldiers seem somewhat slow in terms of movement speed and combat reactions, but players should still listen out for the heavy clank of the suit as they move as well as the winding up sound of the chaingun. The soldier will sometimes (after a successful attack has been landed) stomp his foot down, followed by a distinctive 'ka-chak' as he prepares to launch a rocket at you. This makes the use of Hayden's shield imperative in defeating them.

In terms of fighting the cyber-suit soldier, fire should be concentrated on the two turbine-like structures jutting out from the back of the suit. You will know when you have caused a significant hit when electricity erupts from the suit and the soldier falls to his knees. Keep the pressure up and the soldier will either fall over dead, or start glowing red allowing you to stylistically finish him off by ramming your fist through his helmet.

Defeating the soldier is often part of the game's puzzle solving aspect, as his suit will continuously spout electricity after death. This is often required to charge up the Glaive to open a nearby door. Also, you can pick up their weapon in some cases, giving you a fun new way to defeat later foes. 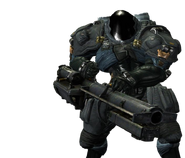 Add a photo to this gallery
Retrieved from "https://darksector.fandom.com/wiki/Cyber-suit_troopers?oldid=4317"
Community content is available under CC-BY-SA unless otherwise noted.