Howlers are one of the earliest and most common forms of the infected. They function primarily as a sort of infantry and utilize melee weapons. They appear by crawling out of bare dirt, or out of storm

Basically, humans who have recently succumbed to the virus. They appear to be mostly male, dressed in ragged clothing and carrying a melee weapon (a pipe or axe).

1st Stage Infected behave in a brutish, unitelligent way. They will charge the player stright on, slowly at first, often speeding up as they are shot. When they have closed distance, they will initiate a clumsy attack with their weapon which can be easily dodged, but can cause a fair amount of damage if it connects. Sometimes they will attempt to throttle the player, initiating a Quick-Time event. A successful response will throw the Infected off Hayden, whilst failure will result in a crushed neck. They attack in groups, swarming the player in typical 'Zombie-esque' fashion. Should they sustain enough damage, the Infected will glow red, allowing a finisher to be performed.

These are assumed to be humans in an advanced state of infection. They appear disgustingly bloated and deformed; their bodies almost completely overtaken with strange metallic tumours.

In terms of behavior, they are almost exactly the same as their early-stage infected counterparts: clumsy and uncreative. They are, however, far more difficult to kill due to significantly increased health, often getting up several times after being shot down. In some cases, if damaged enough, an infected's body will bloat and retract uncontrollably, signalling that it will explode. In this state, however, it can still be killed with a finisher, cancelling out the explosion. Being caught in the blast radius will cause significant damage to the player and any other enemies. On the other hand, causing enough damage will cause the infected to sometimes glow red and not pulse, allowing the player to perform a finisher.

Early stage Howlers have less health than humans. They still take two standard Glaive hits to kill, but can be killed faster with firearms. They attack in groups, so the player should constantly be on the move and avoid being cornered.

Later-stage Howlers are much harder to kill. Players will have to retreat and attack from a distance. Rolling out of the way is recommended.

Note that all Howler infected can be easily dispatched, regardless of infection stage. All a player has to do is circle around the Howler when it's swinging its weapon, melee it once from behind, and perform a finisher.

concept art of a female howler 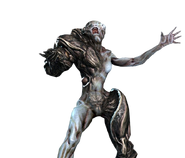 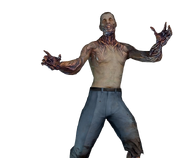 Add a photo to this gallery
Retrieved from "https://darksector.fandom.com/wiki/Howler?oldid=4504"
Community content is available under CC-BY-SA unless otherwise noted.