Start a Wiki
The Jackal is a walking tank used by Lasrian soldiers. Its primary weapon is a pair of mini-guns, but it is also capable of firing a high-explosive shell that can be used to kill multiple soldiers, blow doors off hinges or kill Hayden in a single shot. It is impervious to all small arms, the only hand-held weapon able to damage them being the Rocket Launcher. However, if the player strikes one with an electrified Glaive, it is momentarily disabled and the driver at the rear becomes exposed. Should the player then reach the rear of the Jackal, it can be hijacked. When controlling the Jackal, movement and firing are largely the same as in controlling the Player Character, although the primary weapon is replaced with the miniguns. The player may also fire the Cannon and launch flare-based Countermeasures to ward off incoming Rockets (i.e. the only handheld weapon that can damage the Jackal).

Player can exit Jackal by pressing X, if there is sufficient room behind.

Note that enemy Jackals have an aversion to closing in to melee distance, and thus can be held at bay indefinitely by simply taking sufficient cover. Enemy Jackals can also be momentarily stunned by striking it on the spider-eye-like sensor unit (with a firearm or glaive). With a reasonably accurate weapon it hence becomes a trivial affair to approach the rear of the Jackal and hijack it (providing it has been Electrified previously). 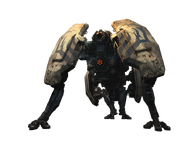 Add a photo to this gallery
Retrieved from "https://darksector.fandom.com/wiki/Jackal?oldid=4599"
Community content is available under CC-BY-SA unless otherwise noted.