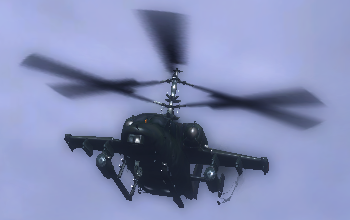 Kamovs are gunships used by the Lasrian forces for both air combat as well as moving cargo and soldiers. The latter function is more common as you can see Kamovs moving around the Lasria to drop of soldiers and to move the caged infected. At two intervals, the Attack Helicopter will become a boss fight that you must complete to progress.

The Kamov usually relies on a machine gun during boss fights. Each round isn't very powerful on its own but if Hayden fails to find cover, the collective damage is potentially fatal on all difficulties. While Hayden is in cover, Kamov pilots may attempt fly-bies in order to gain an advantagious possition against Hayden. This is usually not very effective and often leave the Kamov open as well. Perhaps its most powerful weapon is the rocket systems. At various times during a fight, the helicopter will fire a collection of rockets, which will kill Hayden if he allows himself to be too close to the explosion.

Over all the only weapon that can damage a Kamov it the rocket launcher. The heat seeking properties of the weapon will make it difficult for the helicopter to evade and it takes only three shots to bring one down on the standard difficulty.

Hayden will be forced to fight two Kamovs during the course of the game: one at the end of the first chapter and another on the deck of the "Handy size" freighter.

After exitting into the courtyard, the first encounter will begin with the Kamov firing rockets at the building that Hayden just left. This will prevent him from using it for cover. It will then fly out of sight (though you can still hear it in the background) as a number of Lasrian Troopers attempt to engage him. After killing the soldiers, the helicopter will return and Hayden will have to pick up one of the rocket launchers in order to cause harm. Hayden does not yet have access to any abilities yet so he will have to rely solely on his on cover while being fired at. Bringing down the helicopter will end the first chapter.

To get onto the freighter, Hayden will actually jump onto its cargo, a steel box likely containing one of the infected. On his way to the deck, Hayden will have to kill the soldiers as he did before in order to attract the Kamov. And as before Hayden must get a hold of a rocket launcher in order to fight it. However, this fight is somewhat easier than the last as not only is there more cover, but Hayden has also unlocked the use of the shield to deflect both bullets and rockets.

Retrieved from "https://darksector.fandom.com/wiki/Kamov?oldid=4576"
Community content is available under CC-BY-SA unless otherwise noted.