Maulers, or Riot Soldiers, are close combat specialists. Like most Lasrian soldiers, they wear a Haz-Mat suit fitted with a gas mask, but forego ranged weaponry in favour of a Machete and Riot shield. This shield enables pr

otection from almost all weaponry and allows them to close distance with the player to engage them with a devastating melee attack.

Striking the shield with the Glaive causes the Mauler to stumble backwards for a second, exposing him for an attack. A charged throw will stagger him for a slightly longer period. In some instances the Mauler will grab the player initiating a Quick-Time event, resulting in either death for the player (unsuccessful) or forcing the mauler back (successful).

Disposal of Maulers should be given priority in a combat situation, due to their protective shield and lethal melee attack. As they are often sent in to engage the player whilst under fire from ranged units, the mixture of the two can often overwhelm the novice gamer. 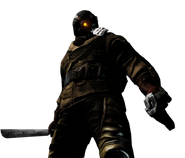 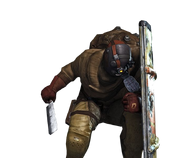 Add a photo to this gallery
Retrieved from "https://darksector.fandom.com/wiki/Mauler?oldid=4316"
Community content is available under CC-BY-SA unless otherwise noted.