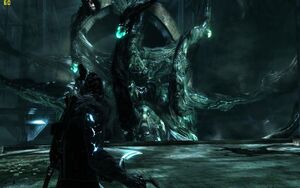 Robert Mezner is the final boss of Dark Sector, before the fight, his infection evolves further, increasing his electropathic signals and telepathic strength, allowing him to connect to and control the actions of a large technocyte biomass that is attached to a transmitter that spreads his electromagnetic signals globally, thus spreading the technocyte plague. The biomass he is attached to has three, large tentacles that have three jaws and glowing, green pustules on each of their bodies, these pustules, when destroyed by an electrified Glaive, dies and recesses back into the main biomass's body. Mezner himself is contained in a retractable, organic canopy of sorts, when the creature is weakened, the canopy retracts and he attempts to kill you telepathically, when you sufficiently damage him, the canopy retracts and the biomass continues the fight. The biomass, appearance wise, is covered in a metallic coating that makes it's main body invulnerable, it seems to have what appears to be Mezner's distorted face stretched all over its body and is attached to a wall with the assistance of many tendrils and tentacles.

Mezner, in this powerful state, started the Great Plague that destroyed most life on Earth, with his amplified signals.

It is possible that the biomass he attaches to is actually a part of his evolved form.

Retrieved from "https://darksector.fandom.com/wiki/Mezner_(Boss)?oldid=4614"
Community content is available under CC-BY-SA unless otherwise noted.