The Stalker is a highly evolved/mutated infected individual that was first encountered on the "Handysize" freighter, when Hayden accidentally releases it from its container. Next, it is seen in the Vozro Research Facility, but not fought. The third and final encounter is when Hayden attempts to save Yargo, and fights it. The Stalker seems to be a very developed form of the Chroma, sharing some visual characteristics with it. It is very agile, able to climb structures with ease. Yargo describes the Stalker as "very old". The Stalker possesses the same "shifting" ability, the ability to turn invisible, as the Chroma. Also, like the Chroma, it bleeds phosphorescent blue blood. It attacks primarily with a large, bladed right hand (similar to Nemesis), which can kill Hayden instantly if he's directly hit. Also, the Stalker is able to spew out super cooled air, which slightly harms Hayden, even from a distance. Finally, the Stalker is able to launch slow-moving but deadly explosive projectiles from the organs in it's forearms, similar to a Chroma's projectiles.

It's projectiles deal massive splash damage, and will kill Hayden within a very large radius. The Stalker is defeated by deflecting these projectiles back with the Shield ability a few times after Hayden deals enough damage to it. If the player backs onto the dry area with the camera and the door, the Stalker will appear and throw its explosive projectiles at the player even before it takes enough damage to start the second stage of the battle. This is a good way to determine the location of the Stalker if the player has lost sight of it, but players should be careful to deflect the projectile back and quickly take to the water. The Stalker stops doing this if the player goes back into the water. The Stalker remains invisible for long duration, but it usually retreats to a corner and/or maneuvers around, not letting the player see it. It splashes the water a lot, so the player will know where it is. The player can freeze the Stalker to the water by hitting the cryogenic ice pods through the windows, temporarily making the Stalker visible and stuck to the spot. However, this is time-consuming and distracting. Players should focus on determining the location of the Stalker. 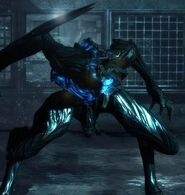 Add a photo to this gallery
Retrieved from "https://darksector.fandom.com/wiki/Stalker?oldid=4679"
Community content is available under CC-BY-SA unless otherwise noted.