Start a Wiki
Stingers are Infected humans that have evolved/mutated, due to their age. Stingers appear as slender metallic humanoids with long claws and strange avian-like heads. They are capable of leaping great distances and heights, changing their position frequently. They are named for their main method of attack: their forearms appear to split open, revealing strange, orange, glowing organs which fire lethal projectiles in a shotgun-like pattern. They prefer to attack in large groups to overwhelm victims. Their metallic coating makes them resistant to firearms and melee attacks, their coating is vulnerable to fire, but they can also regenerate it in a short period of time as well.

Stingers attack in groups, making it easier to get a drop on the player, but the player can negate this by being on the move constantly. Stingers are dangerous at close quarters, as they can fire their projectiles at a deadly point blank range, their claws deal heavy damage and they can grapple you, causing a QTE event to prompt, if this event is failed, the Stinger will decapitate the player. They can be severely weakened by fire and are vulnerable to heavy assaults individually. When significantly weakened, Stingers will glow red, allowing a finisher to be performed. When executed, Hayden will drive the Glaive into the Stinger's chest. Hayden will then decapitate the creatures with the Glaive. 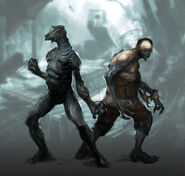 Add a photo to this gallery
Retrieved from "https://darksector.fandom.com/wiki/Stinger?oldid=4682"
Community content is available under CC-BY-SA unless otherwise noted.